Lingvist, and My Move to Montréal

The goal of this post is to collect my thoughts about using Lingvist for over a year to build up my French. Though, the motivations that led to that decision are fun to tell.

So first, here’s some context.

It was during a trip pre-pandemic that I decided to move to Montréal—though I didn’t exactly know it at the time. I flew from Vancouver to Miami via Toronto, and on the way back I managed to find myself in Montréal for the weekend.

The original plan was to quit my job as a birthday present to myself, buy a VIA Rail youth pass (it would be the last year I would qualify for one), take a train across the country, and use a working holiday visa I had already applied for to work in a hostel bar in a French speaking European country—picking up a new language along the way. I wanted to be a living cliché, and find myself in Europe.

My decisions are interesting when I’m bored.

Well, the bad thing (pandemic) happened. The idea of moving across the Atlantic while the world seemed like it was ending wasn’t the best idea. The stories I heard from my friend who had just moved to Madrid kind of cemented that.

It was during this time that I realized that Montréal could work. It’s far enough from Toronto, but not too far. There are no international borders getting in the way (yet). The language of the city is French. So this fits some of the requirements I had for my next move. While there’s a much longer list of reasons why, that’s for another post.

So the question now was, how the hell do I (re-)learn French?

While bold of me to imply I had known french before—with my Ontario core French education, a couple university courses, and a month of doing the Éxplore program in Trois-Rivières over five years before, I did have a decent grasp of the language, or at least remnants of the grammar.

I evaluated my gaps, and thought about what I could reasonably achieve while sitting alone in a studio apartment in Vancouver. I came to the conclusion that vocabulary would be the main initial goal. It had deteriorated quite a bit over the years, whereas my advanced grammar had too, it wasn’t the most important thing right now. The goal was to be able to read a novel without a dictionary—something that didn’t require any human interaction to achieve, unlike having conversations.

Alright, the best I can do right now is to build up my vocabulary, how to do that?

It began of course, with Duolingo. I’m not going to elaborate further because there’s enough content on the internet to understand why the product is just… no. I will say though, that their social media presence is supreme—seriously, only post-pandemic would a company embrace an internet meme which casts their company mascot as a murderous forcer of language learning using tactics akin to mob bosses?

The goal of this post is not about why I chose Lingvist, but rather how the last year or so has gone, so lets get to that. 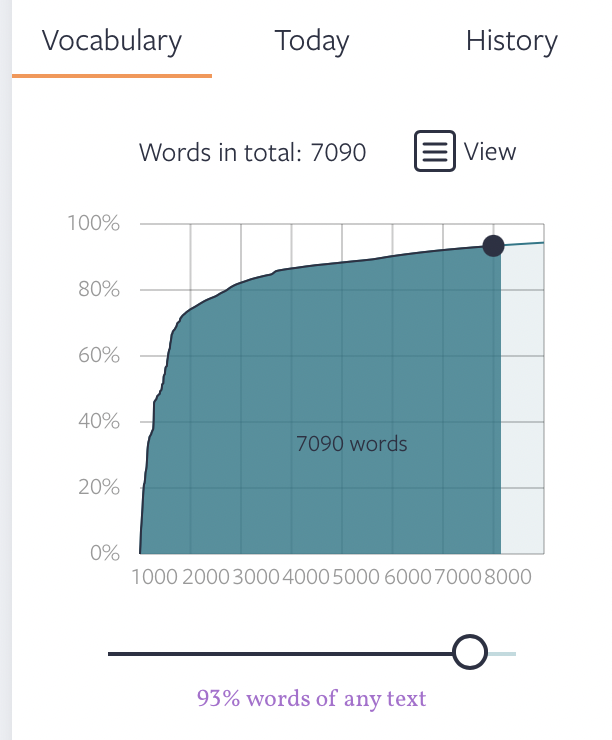 The same calculation for cost:

So learning ~388 words a month for $9.72 a month? I would say Lingvist is definitely worth it. Especially given I spent only 10-15 minutes to go through 100 cards, 4-5 times times a week. The only other effort required on your part is to have the self-discipline to open up the app, or load the website and click Continue Learning.

The application is also quite beautiful. It has a generally muted colour tone with unoffensive accent colours. Though, the application went through at least one UI styling overhaul while I was using it.

The learning process is straight forward. Lingvist provides a card with a sentence, and the English version(s) of the word, along with a translation of the sentence. That’s basically it. 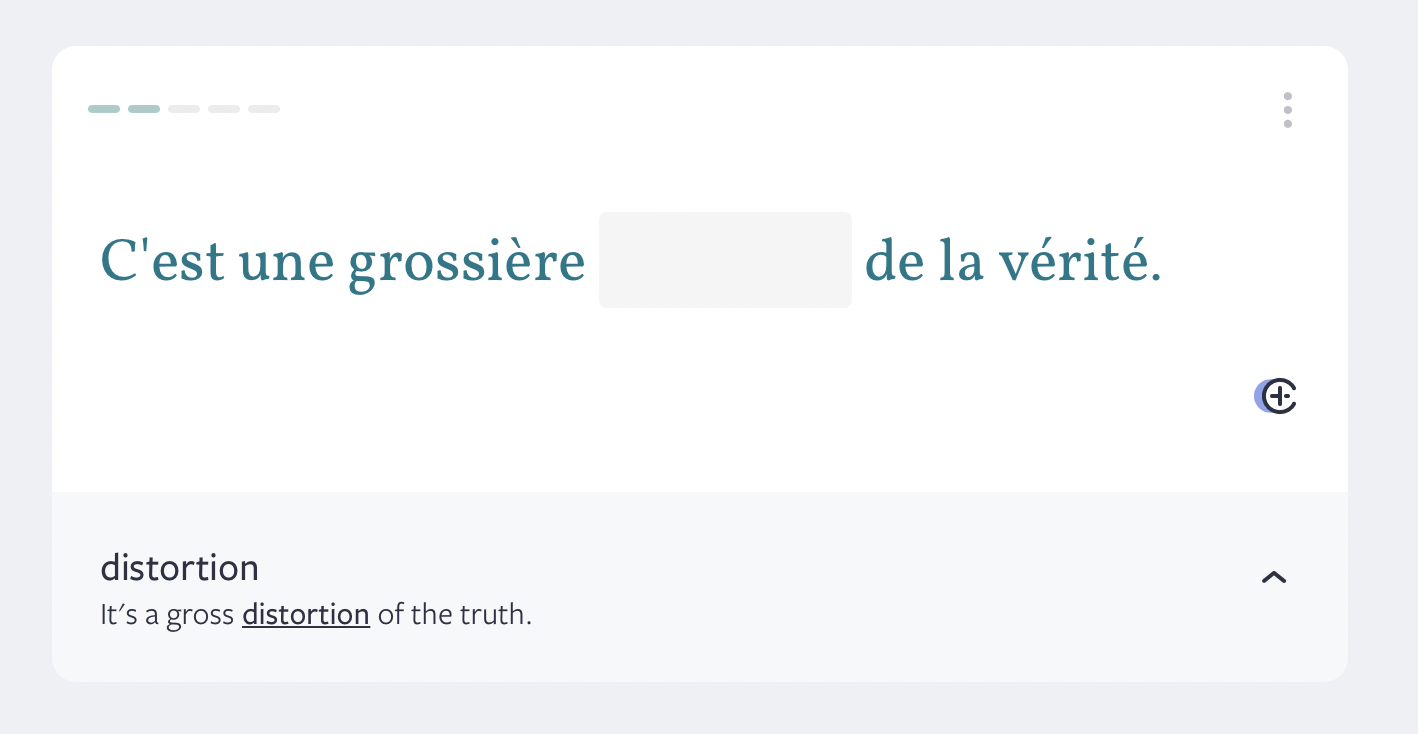 You’re essentially paying for a company to simplify the process of showing you flash cards, and to make those flashcards conveniently available to you in a browser, or on your phone. In my mind, paying a nominal amount to remove as many points of friction as possible, removing as many changes I would have to dissuade me from practicing, therefore maximizing my changes of success is worth it.

Note: There’s a separate section for grammar practices, but I wasn’t interested enough to use them so I don’t have any comments to make.

This isn’t a full review of the service, there are many of those. But to summarize it, it’s unoffensive, saved me a lot of time doing busy work creating cards, and doesn’t feel condescending at all like Duolingo. Within a year I was able to read a Québecois novel and get through many pages without needing to use a dictionary. I consider that a massive win.

Though, as I pass 7000 words, I realize that I have outgrown Lingvist.

I outgrew the main General Vocabulary deck that has 6300+ words a few months ago, and tweeted about it:

what do I do now that I've learned all 6303 French words available on @Lingvist 🤔 pic.twitter.com/uRyqixzMVK

To my surprise Lingvist replied and mentioned the ability to create custom decks. While the process was tedious—it involves entering words into a field and pressing generate, waiting, rinse and repeat, it’s a one-time thing, and worked.

But, over the last couple months I realized that the cards feel ‘unofficial’, and a bit lower quality. I include an example below. 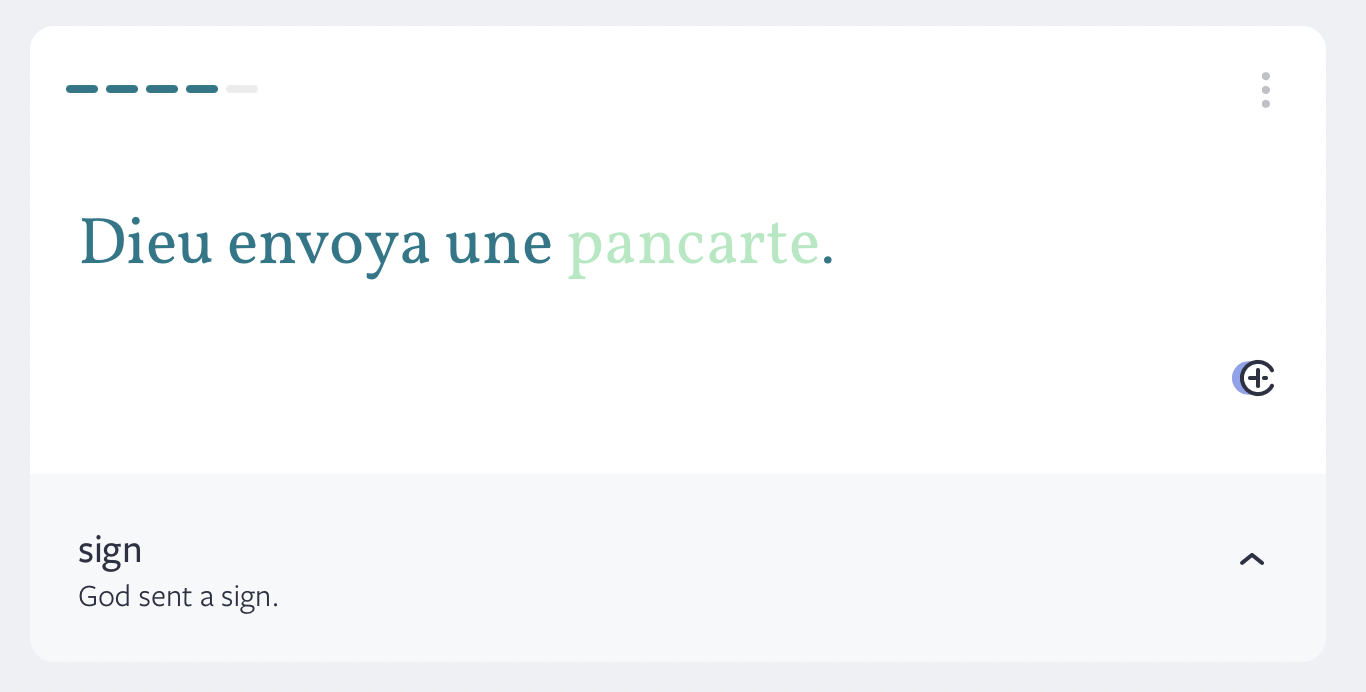 Show the above card to any native French speaker and they’ll laugh. It’s the equivalent of telling someone that God sent you a sign, literally. As in, God was at a protest or something and passed you a sign He was holding. On top of the incorrect translations like above, other cards will have translations of the sentence missing, and others will have the gender icons missing.

It has nothing to do with the service itself, but I’ve simply out grown it and at this point. One other, but significant point is that the French on the service is international+metropolitan French. Given that I’m living in Québec, there’s an entire spoken vocabulary that I will never get from the cards. The next step to build my vocabulary now is through reading Québecois novels.

I’m extremely thankful for the team behind Lingvist for getting me to this point. You’ve created an excellent product that significantly helped me learn French, and improve my move to Montréal in such a significant way.